Changing the Goals of the System: A conversation with Dan O’Neill on moving away from economic growth and bringing about a 1.5° lifestyles transformation

The IPCC report underlines the need to stay within 1.5° of warming.
We sat down with Dan O’Neill to discuss the topic of transformative change, (limits to) economic growth, and how 1.5° lifestyles can be “a good life for all”. Below we have summarised the key takeaways from our discussion.

Dan O’Neill is an Associate Professor in Ecological Economics at the University of Leeds. His research focuses on the relationships between resource use and human well-being, and the changes that would be needed to achieve a successful post-growth economy. Dan’s groundbreaking research on achieving a good life for all people within planetary boundaries has been published in Nature Sustainability, and also as a book (Enough Is Enough: Building a Sustainable Economy in a World of Finite Resources). Dan is also the President of the European Society for Ecological Economics and hosts a very popular online lecture series on ecological economics. For more information on his work you can visit his website.

The latest IPCC report highlights the close connection between economic growth and environmental devastation. The way we currently measure progress (as growth in production, or GDP = gross domestic product) is deeply flawed. Dan suggests that we need new indicators and measures of success: "I tend to think that if we can change our measure of progress as a society away from GDP, that's really gonna help. It comes down to the idea of changing the goal. It’s inspired by the work of Donella Meadows and her idea of leverage points — points to intervene in a system. If you just change some parameters in the system, it doesn't have that much effect, but if you actually are able to move to the level where you're changing what the system is actually attempting to do, then a change there can have a huge effect, because it filters through the entire system.” He adds, “Economic growth is institutionalised [in our system] through narratives and measurements. And so I think that's quite an important thing to change.”

Dan explains that since the goal of economic growth is a very deep structure in our political, economic and social systems, changes are difficult, even if urgent and necessary. His own experience of engaging in policy-making with political parties in the UK has been complicated. While individual actors are sympathetic to the science behind the environmental crises, as well as the need to move away from economic growth, “It's really hard for a politician to stand up and say ‘We're not going to focus on GDP growth anymore. We're going to focus on this other thing.’ Because, they fear they will just get torn apart by the opposition, who will say: ‘Well, the reason you don't want to focus on this is because you can't do it!’”

Nevertheless, there are avenues for bringing about changes and challenging the structures of economic growth for a 1.5°Lifestyle transformation.

“One of the most important things is being able to actually show people what the alternative would look like, and show that it's a desirable alternative.”

Dan agrees that new societal goals must be based on new alternative visions of welfare - or 1.5° lifestyles - that offer a way out of the current system. Having this positive and desirable narrative of a good life within planetary boundaries is key. He suggests that this is also how to frame discussions on societal change.

"When I first started working on this stuff, I used to give talks about ‘limits to growth’, and ‘the problems with growth’, and ‘what we might do about it’. ‘What we might do about it’ was always the thing that people were most interested in. And so over time I started talking less and less about the ‘limits to growth’ stuff and working more and more on ‘what does the alternative look like?’. That was always the question. If you're not able to offer that alternative, then you don't get anywhere. One of the most important things is being able to actually show people what the alternative would look like, and show that it's a desirable alternative. And if you can show that, people can get behind that idea.” 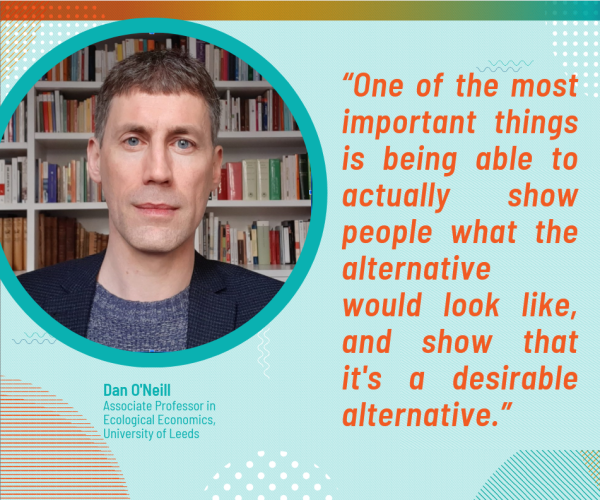 How do we “change the goals of the system”? Tips for policy change.

1. Dan suggests lobbying for changes in the language used around economics in society, and changing the language we use ourselves. “Instead of talking about economic growth, let's use a different language.” For example we can use the term ‘economic progress’ instead.  Dan suggests that even using the term ‘development’ is better, “because it doesn't mean growth in the sense of increasing physical resource use in the same way that ‘economic growth’ does.

2. Changing the language around the economy also means using different indicators when discussing ‘progress’ in the economy, and avoiding GDP as a measure. Other indicators include: wellbeing, employment, equality, environmental indicators such as material use, or CO2 emissions, to capture a variety of different issues that signal how well a society is doing.

3. Focusing on these other indicators and pushing for policies and progress in these areas can gradually move us away from the pursuit of economic growth through a ‘Trojan horse method’:. “If we implemented a universal, basic income, or we implement working time reduction (or at least policies to make it easier for people to choose their own working hours), these policies would weaken the growth imperative within the system and make it easier for us to move away from growth.”

4. We need to put pressure on politicians to implement these policies and need politicians with leadership, but civil society has a role to play in normalising discourses around wellbeing topics, and pushing for change. This can include policies like the 4-day work week, for example. As Dan explains, a lot of the policies that move us away from the growth imperative towards wellbeing and 1.5° lifestyles, are already being implemented in countries and local contexts around the world, therefore making it easier to get over the ‘first-mover’ hurdle for policymakers.

5. We can also learn from history and transformations in the past: crises have historically been a time for societal transformation. “Crises are an intervention point, where things happen very quickly. We go a long time without anything truly changing and then all of a sudden things can change really quickly. This sort of change is non-linear.” Dan explains that we have a lot to learn from the neoliberal revolution of the 1970s-1980s, where a concerted effort was made by conservative forces and business actors in the US to crush the power of labour unions and socially progressive forces, which they saw as a threat to business interests. These actors “just waited for a big crisis while they had all the ideas and policies ready to go”.

6. According to Dan, there is currently a lack of policy coherence within different civil society forces and environmental groups when it comes to the direction of change needed for  1.5° lifestyles. Dan explains that although there is broad agreement amongst many different progressive groups on the need for change towards sustainability, this message is dampened by “too many people running off in different directions”. As members of civil society, we need to try to “get behind a single, simple message” as much as possible. This includes uniting different strands of thinking and progressive discourses on the environmental crises.

In sum, it is possible to actually improve societal welfare while reducing our environmental impacts. This will require deep social, political, and economic changes to the current organisation of social welfare. The tips above provide only a starting point for continuing societal discussions on where we are headed and where we want to go.