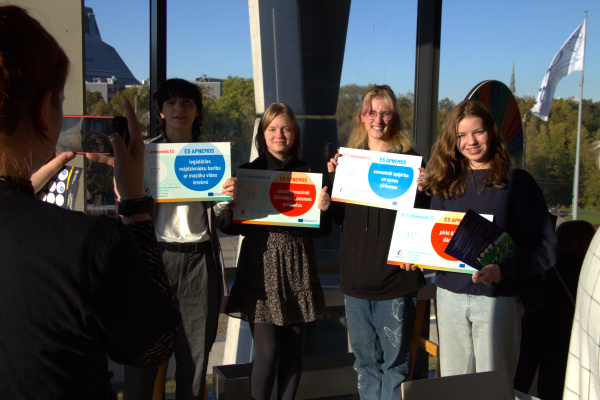 We as a society in Latvia are poorly concerned about climate (European Commission, May – June 2022), and also, we often are reluctant to participate in discussions and connect climate change reduction initiatives to our lifestyles. This is the reason why we – Green Liberty team – prefer to use gamification as a technique to gain increased attention of society to urgent global issues, including climate lifestyles. The gaming elements that we use to keep participants’ attention are diverse. Yet in our latest events, we choose to use drawing cards, spinning the wheel, and taking a picture with a statement of a commitment to a climate-friendly lifestyle. These elements make our climate discussions more connected, therefore more meaningful.

On the 30th of September 2022, research centres and institutes around Europe were hosting the 17th Annual Researchers’ Night. In the Green Liberty EU 1.5° Lifestyles team, we saw this as a great opportunity to communicate EU 1.5° Lifestyles approach to broad audiences in Latvia. Jānis Brizga and Kārlis Lakševics, with assistance from environmental science students, ran a program at the University of Latvia, while Inga Belousa, with Green Liberty volunteers, organised an event at the Daugavpils University. Through several activities, we guided participants of the Researchers' Night towards imagining how they can reduce their lifestyle emissions and reflect on the easiest and hardest steps on the way.

The main tool in our exploration was the Climate Puzzle developed by D-mat. Freshly adapted to Latvian, it served as an interactive tool that our visitors could use to evaluate their lifestyle’s carbon intensity. Participants started by scanning a QR code of a carbon footprint calculator, made by the Latvian section of the World Wildlife Fund, and then could proceed to analyse what actions could reduce their footprint. The puzzle is designed to be played alone, but since the event’s major audience is families with children and youth groups, many decided that they would like to do this together.

As a result, the rooms became spaces for rich debate on climate, lifestyles, and responsibilities. While some families and youth groups enthusiastically debated what they’re willing to do and what their red lines were, some were also happy to dispute with us which solutions they think are possible and which don’t suit Latvia at all. We observed that the carbon footprint in general was lower for those participants coming from the regions. Also we observed that most of the young people had generally lower footprint than the Latvian average - as they don’t earn money, don’t have a car, and live in a shared space (e.g. with their parents or in dormitories). But in many cases they also don’t have full control over the resources they use and thus have a limited capacity to influence them (e.g. kids living with their parents or in dormitories referred to the fact that they would love to put the solar PV panels on the roof, but this is not their property and thus they don’t feel they can influence these decisions). 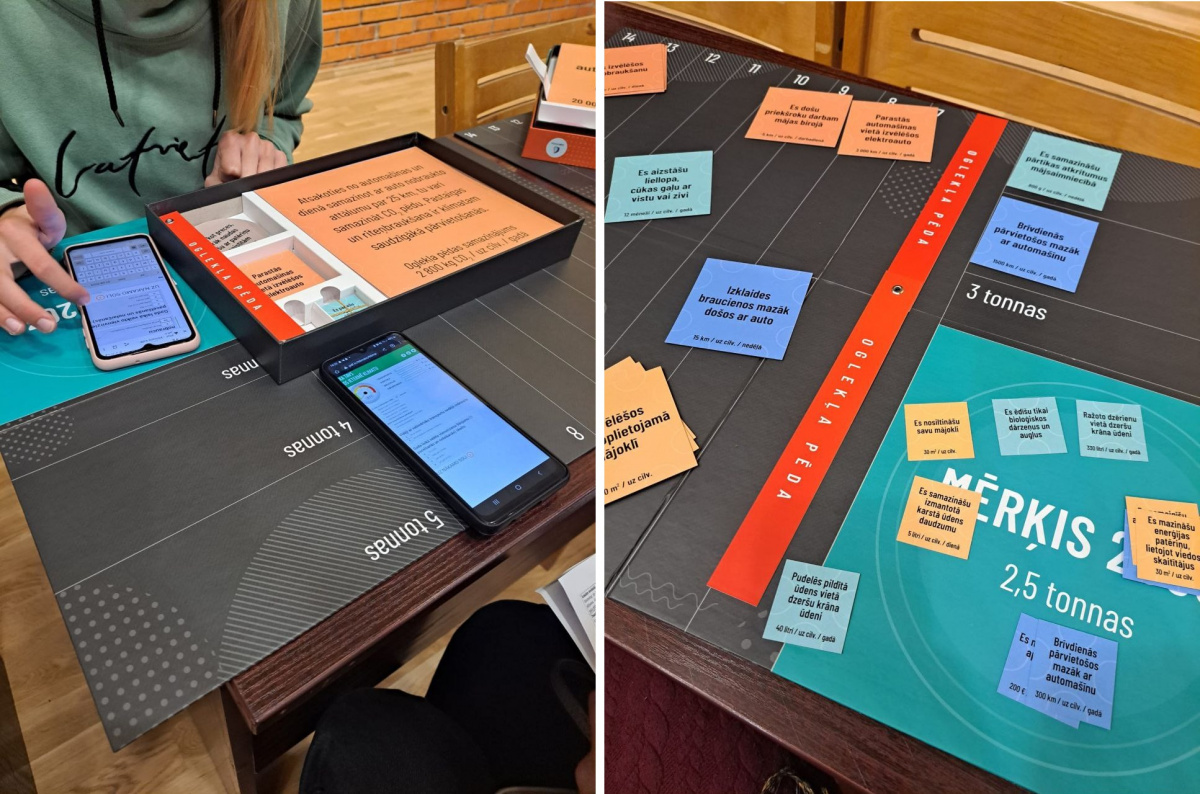 The puzzle proved to be both a challenging and enriching family experience. A father and his two children decided that the children will drive to school by bus instead of the father driving them in their family car. It turned out that this discussion was long due in the family as it unexpectedly was a bit of a burden to all of them. Both sides realised that taking the bus actually increases their independence. Unsurprisingly, discussions on using public versus private transport were among the hottest ones as many barriers to change persist. For some, their house was located in a place without public transport options. Others thought they’d like to ride their bicycles more but they don’t feel safe on Riga’s or Daugavpils’ streets.

Even more, not all of the experiences led to clear solutions or good feelings. If some of the actions are unreachable to many, others require unpopular decisions. As one participant described it: “give me each of these actions and I’ll tell you why it isn’t possible.” Some participants had professional expertise in the fields of transport and energy efficiency and were eager to challenge the solutions themselves. Interestingly, one of the experts couldn’t see how he can reduce his footprint to 2030 goals by the provided actions, but his relief was that he has reduced many tonnes of emissions through his energy-efficiency related job.

Nevertheless, most participants (that ended up being more than 150) found a way to complete the puzzle and were also interested in grabbing a printed list of possible actions home. The list included actions in the domains of nutrition, housing, transport, and leisure sorted from lowest to highest impact. We also had printed selfie tablets describing commitment to make one of the carbon-reducing lifestyle choices. Several participants had the courage to commit to making one of the actions.

For younger visitors, to whom the climate puzzle was too complex, as well as for everyone else, we used two other activities. First, we made a spinning wheel with different questions about the climate, inequality and lifestyles. A person spinning the wheel would get a random question that makes them reflect either on their lifestyle or more general climate concerns. With the youngest children we discussed which of their favourite activities have the least and most impact on the climate. Parents were quite happy to hear that overuse of Xbox and other electronic devices is not among the best options. For youth, however, realising that their highly mobile hobbies that make them travel all over Europe, also have a dark side, was unsettling. Nonetheless, we found out that many look forward to the completion of the Rail Baltica rail track that will allow for faster land travel to other European countries.

Second, we played Jenga adding 25 question cards to it. The question cards introduced three types of questions: about lifestyle and its carbon footprint, about actions that promote sustainable change, and about what characterises the climate change situation in Latvia. Each question card has one question. The goal of the game is to build the tallest tower possible without toppling it while discussing climate-friendly lifestyles. When the tower of wooden bricks is ready, everyone decides who will start the game. The first participant draws one question card, reads the question aloud and answers. If the answer is correct, the participant removes one wooden block from the bottom of the tower and places it at the top. If the participant cannot answer the question or answers incorrectly, then the block should not be moved. If the placed block does not fall within a few seconds, then the move is successful, and the next participant continues the game. The winner is the last one to place a block without toppling the tower. Participants were excited to split their attention between answering climate questions and building a tower.

Overall, interactively tinkering with the EU 1.5° Lifestyles framework on the Researchers’ Night proved to be a fruitful prompt for exchange for families and youth to explore the complexity of current climate challenges. While our mouths got dry after explaining the puzzle and discussing the many lifestyle actions for several hours straight, many visiting formal and non-formal educators expressed interest in using the puzzle in their lessons. Thus, we hope the event will also spread the word of 1.5° Lifestyles further and open up other spaces and times for transformation.