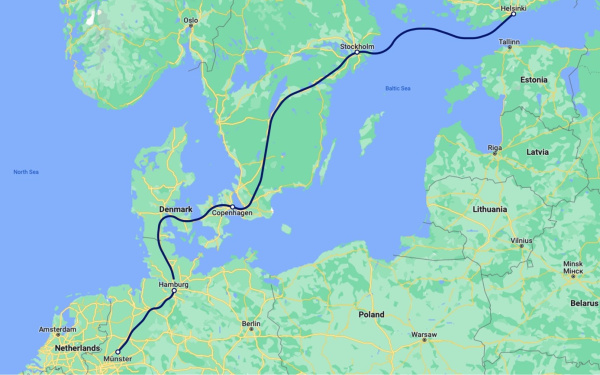 The CO2 emissions of flying have been a hot topic for several years now, especially during the COVID-19 pandemic when the amount of flight travel decreased momentarily (UN News, 2021). In the meantime, discussions on alternative ways of travelling have surfaced. But how convenient is it to travel by train in Europe? During spring 2022, when it was time for our first in-person meeting in Germany with the EU 1.5° Lifestyles partners, my colleague Daniel Leiviskä and I decided to skip flying. We embarked on an adventure from Helsinki, Finland to Münster, Germany by train and ferry. For those who are even slightly interested in travelling in other ways than flying, we want to give both an inspiring and realistic example of what it was like for us.

Our journey started on a Friday afternoon from Katajanokka, Helsinki, where we boarded the ferry that would take us to Stockholm. On the ferry, we had a small cabin reserved for the two of us as most of the trip was done during the night. In the evening, we mainly hung out at the cabin and took a few walks to the ferry deck for some fresh air.

The next morning we arrived in Stockholm at 10 o'clock. In Stockholm, we headed for an amazing vegan brunch at Hermans (thanks to Daniel!) at the top of the city and spent the day slowly walking towards the central railway station. On our way, we spotted a grey heron in a canal next to the Royal Palace. We decided to hang out with it there for a while as the weather was very nice and warm. 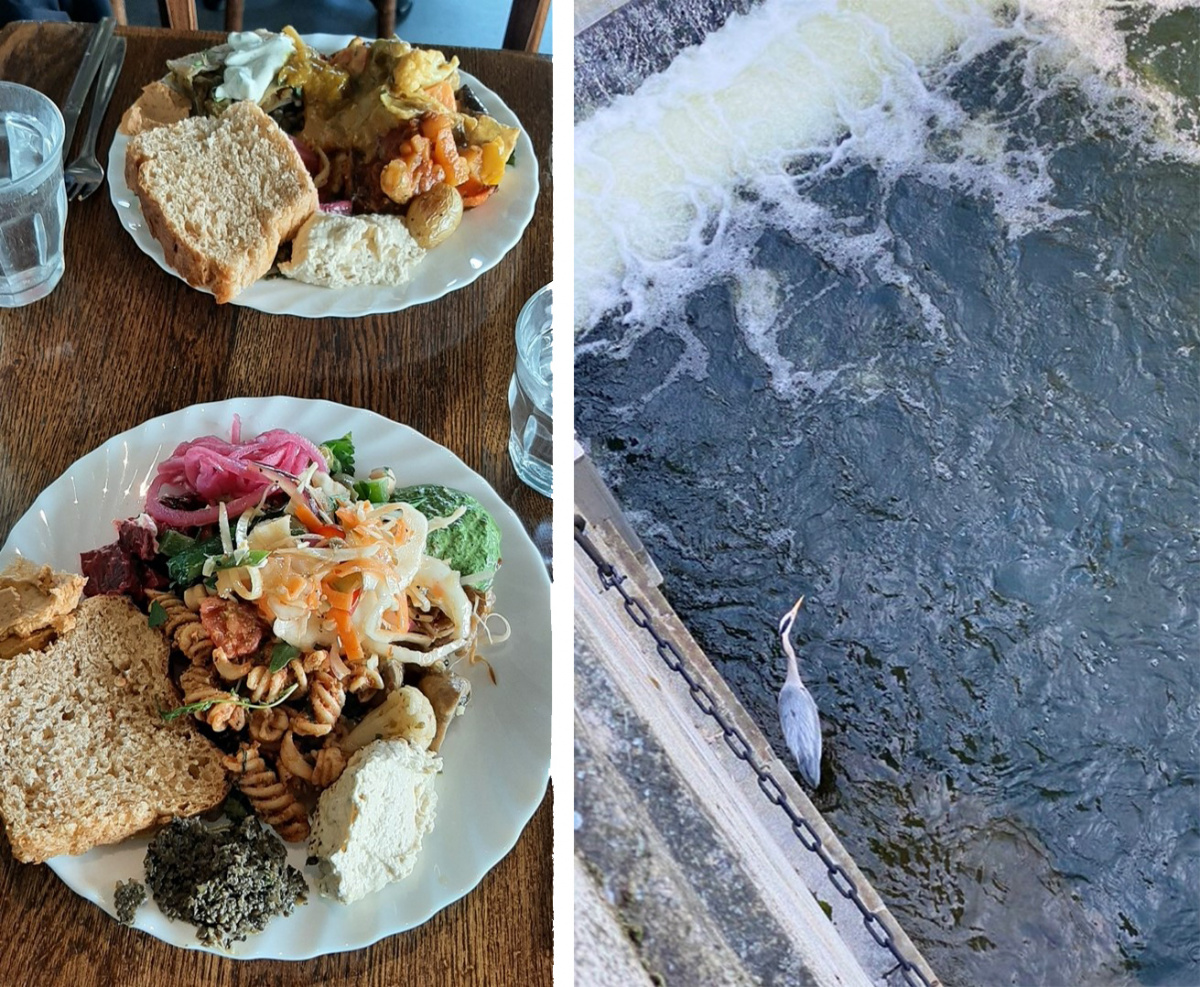 Brunch at Hermans and a grey heron, our friend from Stockholm

In the afternoon, we jumped on the Snälltåget, a train that took us from Stockholm up to Hamburg. Once again, we had a sleeping cabin that was perfect for two, although it had a total of six beds! During the evening we worked and had dinner at the sympathetic train restaurant known as “Krogen”. We also got to admire beautiful scenes, such as the sunset on our way to Malmö and the full moon in the middle of the night when crossing a bridge to Copenhagen. In the morning, we woke up to sunshine somewhere in Germany and enjoyed a small breakfast in our cabin. All in all, the journey took approximately 17 hours and travelling with Snälltåget was one of the highlights of the trip. 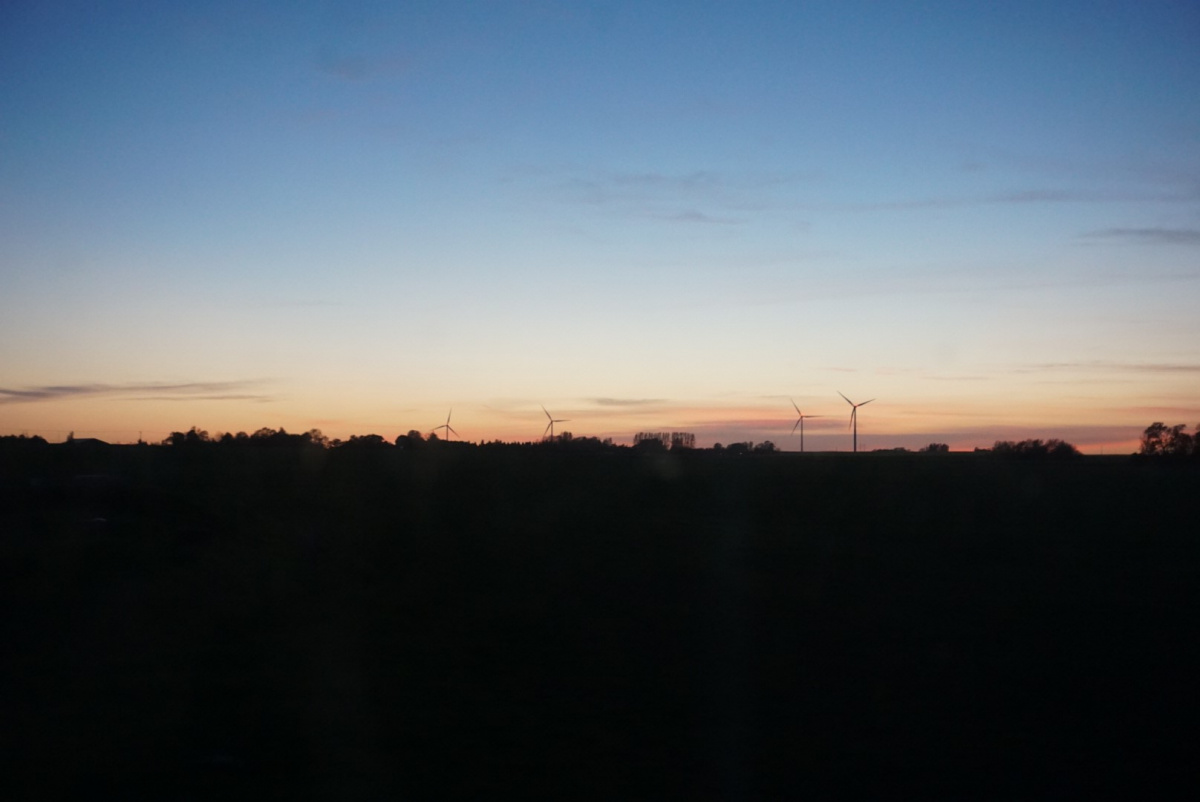 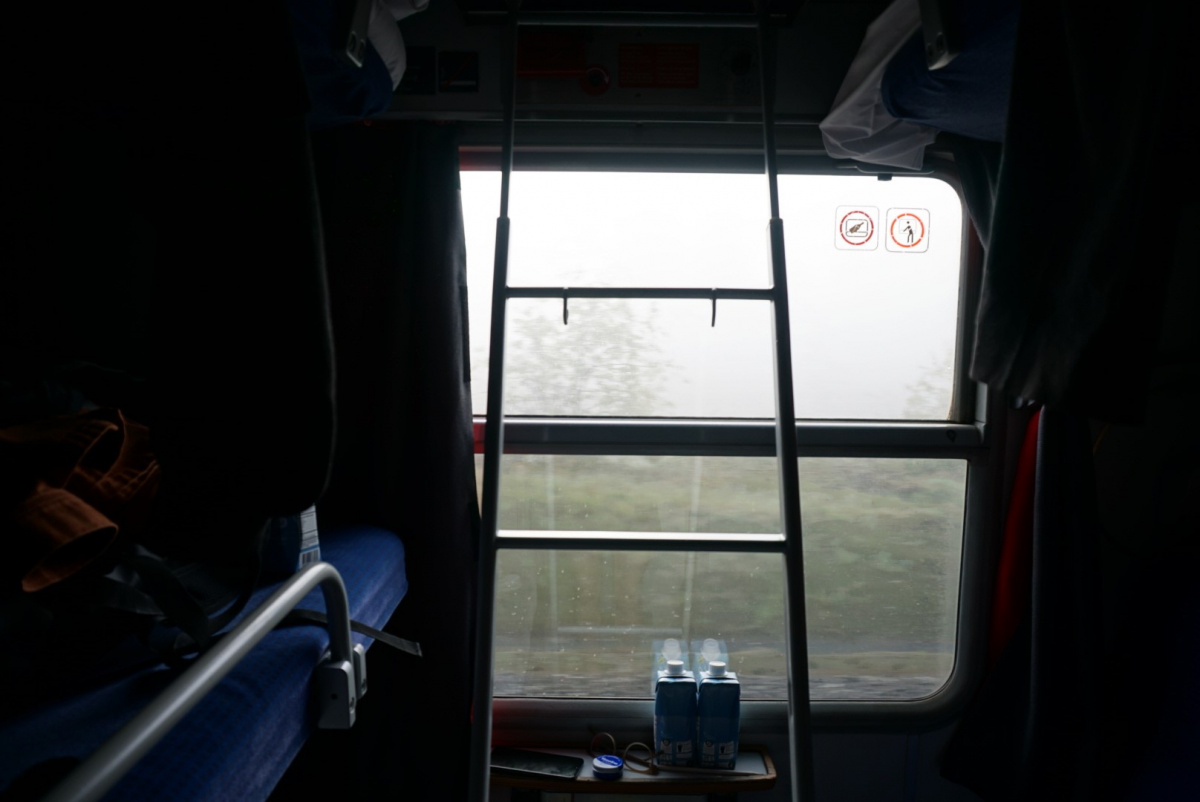 A sneak peek into our sleeping cabin

When we arrived in Hamburg on Sunday morning at 9.00, we first went for a small walk as we were both new to the city. Overall, we didn’t spend much time there as our next train was set to depart at 13.00. We walked around a little and had very delicious vegan burgers. However, as there had been a cable fire at the Hamburg central station a couple of days before, there was a bit of extra hassle at the station and trains weren’t leaving on time. The station was packed with people as everything was either cancelled or delayed. Fortunately, after 1,5 hours of waiting, we managed to catch a train that was headed to Münster. After a couple of hours on the train, we were finally at our destination! A bit tired, but happy.

Our journey in a nutshell:

In total, our trip lasted for two days, partly due to some delays in Hamburg, which was also the only (small) problem we endured on the trip. In addition, Snälltåget’s ride took a bit longer than usual due to track work in Sweden. All of our tickets were pre-booked and as mentioned, we had sleeping cabins where we spent our nights. This made travelling a lot easier for us but also more expensive. Although the beds were rather small, we were still able to get a decent amount of sleep. In addition, we both had packed rather lightly for the trip as we knew there would be a lot of walking.

Tip: When it comes to travelling by train, the best thing is being able to witness how the view and architecture change between the countries you pass. This makes the travel itself already a part of the trip in a whole new way. Watching out of the window is something we enjoyed very much. Although the trip itself was longer compared to flying, this didn’t bother us during our travel. We found it very delightful to cross through other cities and countries to reach our final destination. Moreover, this trip encouraged us to favour trains in the future when travelling outside Finland, at least in one direction.